A sad end to an historic campaign. 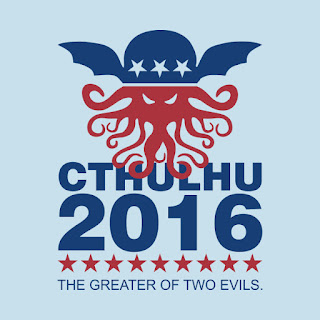 A sad end to an historic campaign.

The night started out in such hope.  The Jersey City Ramada Inn had been booked for weeks; every room filled with hundreds of loyal and hopeful supporters of the Ancient One.  In the Magnolia Ballroom C, preparations for the huge victory celebration for the election of Cthulhu had gone on for weeks.  James Carville, campaign manager, said no expense had been spared for what all knew would be the party of all parties once his candidate was elected.  Every expert agreed, and all predicted this victory celebration would be the most blood splattered, orgiastic and profane celebration since the great Prague infant slaughter of 1132.  Smiles, at least at 6:00 PM, were wide on every face.

High above the ballroom floor, thousands of gore filled balloons, carefully harvested from the corpses of unbaptized youths, dangled from the gold coffered ceiling.  They stood in anticipation for the fateful moment Wolf Blitzer was sure to announce the Ancient One had reached the coveted 270 electoral college votes and then be released in a sanguine shower on the writhing naked masses below.  All were sure it was just a matter of time for the blessed event to occur.

Coven 32 from Elm City, North Carolina were already stripping down and covering themselves in sacrificial goat blood.  Their high priestess busily finished drawing the cemetery ash pentagram on the shiny faux-marble floor required for the ritual planned once they were over the top.  Amidst the celebratory cries of “No Lives Matter”, “We are going to make America Awful Again!” and, “I’m with the Ancient One, who none dare speak his name,” cocktails were imbibed, canapés consumed and a wonderful time was had by all.  And then…., it all started to go wrong.

By 9:00 PM, and Florida was still too close to call, nervousness started to fill the hall, and the anxiety level of partygoers could be felt rising like a cold, clammy fog wafting in from an icy sea.  Things had taken a turn for the ugly.

“I just don’t get it,” Sharon Simmons, High Priestess of the Oregon chapter of Satanic Sisters for the vile one, said.  “We had all of the right messaging for this election.  The people claimed they were choosing between evils this time.  Well…, who is more evil than us?  Hillary wanted to allow abortion ONLY up to birth!  HA!  Amateurs…, Cthulhu had a platform that was Pro-Choice up to the age of 22!”

At 10:30, when North Carolina was called for Donald Trump, the light murmurs of worry from earlier in the evening broke into a steady roar of panic.

Arnold Fishbein, serial killer and arsonist, as well as campaign finance chair, put on a brave face, but, it was obvious something was wrong.

“Look…, Cthulhu still has a path!  If we can lock up those Midwest states, it is sure to be a sweep,” he said.  “Voters really connected to the Ancient One’s message of complete and total destruction of all life, manmade structures and beauty.  We need to get America working again, right?  What better jobs program could there be than wholesale slaughter and rampant carpet bombing and unrestrained looting and arson?”

By 11:30 PM, the grim mood in the room had dissolved into an ocean of tragic weeping.   Gerard Depuncle, Communications director, just sat in the corner of the ballroom shaking his head.

“I just don’t understand,” he said.  “Voters were obviously attracted to a campaign of negativity this cycle, all of the polls showed it.  How could our last minute, 24 hour, live feed of Kitten Vivisections not have reached its target audience?  What could be more negative than that?”

Fredrick Ambossa, chief domestic advisor to Cthulhu, was equally troubled by the turn of events.  “We really needed to up our messaging on our immigration policy.  I just don’t know why we didn’t connect.  Trump wanted a wall, ha!  Our plan for a two-thousand mile moat of boiling virgin blood, ringed by a whirling steel barbed wire fence of flame surely should have caught on!  For God’s sake, we had plans to not only deport, but to murder every man woman and child in the country!  How more hardcore can you get than that?”

At 2:30 AM, the ballroom erupted into applause and hooting when the Ancient One emerged onto the stage.  Despite the clapping, tears streamed down the faces of the loyal supporters still in attendance.  Cthulhu had conceded.  It was over.

Cthulhu tried to be upbeat, but, defeat saturated his body like a stew of boiled rotting donkey carcasses.  His normally flailing and animated tentacles now hung loose from his fanged jaws, like overcooked spaghetti.  His message was uplifting to the crowd, but, once he slithered offstage and ascended the escalator to the mezzanine, the stunned and shocked supporters started to leave.  It was a sad end to such a noble campaign.

“This is crap!” Samantha Fredricks screamed as her pallid, death-like countenance was streaked with black mascara from her tears.   “This country is so backward.  This was the year.  After 200 years we were finally going to elect an immortal Demon God from the black, infinite void of madness!  Now, we are just going backwards.  It was supposed to be his turn.”

“So, are you going to now go out on a rampage of pillaging and looting?” I asked.

Samantha interrupted, as her face dropped, “Yeah, this has screwed up my plans too.  I was already slated to be slaughtered for the great sacrifice to the desolation of abomination once Cthulhu won, but now, I guess I will have to go into work tomorrow.  My spleen will just remain in my body after all  — unchewed.”

“So, what are you going to do instead?”

“I suppose I will just go Netflix and Chill.  Perhaps binge on “Orange is the new Black”.

“A wise choice,” I said with a knowing grin.

It was a tragic and sad ending to a noble campaign.  Once again, it has been shown, the system is rigged.   Third party candidates just cannot win.
Posted by Paul Creasy at 1:16:00 AM