Let us welcome our Barbarian overlords! 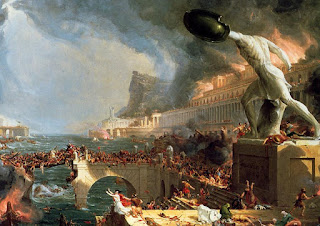 At times like this, I often wonder exactly when it was that citizens living at the end of the Roman Empire realized it was truly over.   There must have been some pretty obvious signs of the rot and decay before the final collapse, but then, as now, I am sure such signs were ignored until it was too late.  Humans have not changed that much over the centuries, really, and I am sure it was possible to look past such signs of impending disaster for decades until eventually, such signs were impossible to ignore.  The natural ability of man to ignore obvious ugly truths staring them in the face is one of our species most amazing skills.  Things are no different now as they were in 476.

After all, Rome wasn’t burned in a day.  But still, there must have been some point when, even the most optimistic and rosey scenario minded individuals got a sense that things had reached a tipping point, beyond which, there was no turning back.  Are we at such a time now?  I often wonder…, but, if Rome hasn’t fallen quite yet, it is hard to ignore the smell of the charcoal starting to smolder.

This did not happen overnight.  Our decline has been bubbling for quite some time now, like a kettle left on the stove and forgotten about until it bursts into flames and sets the house on fire.  Perhaps we are finally reaching our Visigoth moment.   Unlike our Roman counterparts from 1,700 years ago, however, we managed to burn our own Nation down in advance.

Maybe this is not a bad thing.  A silly people need correcting sometimes, and has there ever been a sillier display than this last year?   We deserve what is happening to us.  We asked for it.  We got down on our knees and begged for this, and now, the bill has come due.

I had always hoped that, if or when our nation eventually goes into irreversible decline, it would at least be dignified.  Now it appears, even that final flickering hope has been snuffed.   The jury is in.  The funeral pyre of our republic will have as its last fuel, the spectacle of the 2016 race.  We are going to go out with a whimper and not a bang.   A fitting tribute to the final Jerry Springerification of our culture.

Think about what we are discussing now.  Wrap your head around what the actual “debate” raging in the country is.  With the world flying apart, and the 70-year-old vision of a united Europe dissolving, and Russia returning to its expansionist authoritarianism roots, and the economy bifurcating more and more into a bi-polar reality between haves and have-nots, all the while Isis imposes a nightmarish vision on the Middle East that would have caused Torquemada to blush, we have devolved into this latest mud filled political debate between Clinton and Trump.  Wow!

Rather than fight this slide into the oblivion, maybe we should embrace it.  After all, we brought this horror, as almost all horrors are, upon ourselves.  We should enjoy the fruits of our labors.

Civilizational pessimism is fun sometimes.  It is always enjoyable to wallow in the pre-glow of the apocalyptic fires of society’s destruction.  One of the reasons it is such a joy to be a pessimist about such things is, history normally proves you right.  It really requires an almost complete anesthetizing of your cerebral cortex to remain optimistic about human endeavors over the long run (or even short), and if you have any lingering doubt about this dark theory, just review the last 12 months.

So I say let us stop worrying and lift a glass of ale to our future Visigothic overlords.  Come Conan and all of your buddies, the Empire is ripe for the taking.   We made it so easy for you.